The basics of power systems – 5 questions and answers

As the world accelerates towards the energy transition, sharing knowledge and stimulating innovation will be key to its success. Sometimes that means going back to basics of what power systems are. So today, we’re going to answer these 5 critical questions about power systems:

If you’re an industry expert or a budding new business, knowing the answer to these questions can help you better adapt to the energy transition.

Power systems involve intricate channel systems all supplying power from the station to a number of energy users. To understand this better, it might be easier to imagine it as the circulation system in a human body. The heart acts as the power station of the body, as it sends energy to all the different organs. The heartbeat determines how fast the blood is being pumped, with the increased pressure resembling the voltage of power.  The larger arteries act as the transmission lines, while the smaller arteries are the distribution lines. All of these end up connecting to the different organs, the energy users of the human body. 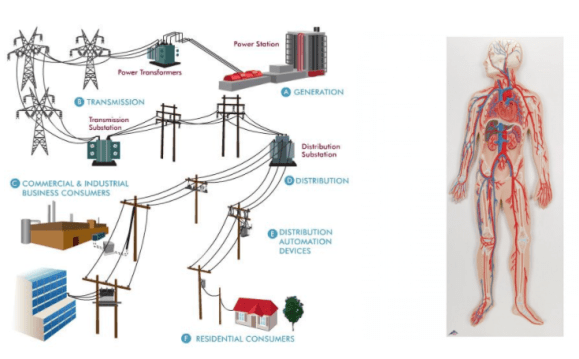 Power systems have significantly evolved over the last century. The image below illustrates how the Swedish grid has evolved, starting from two disconnected power systems to a unified national grid with a complex transmission and distribution system.

Despite how much power systems have evolved and changed, 3 basic components remain the same:

– Generation – How power is created

– Transmission – How power is moved from point A to B

– Distribution and Loads – How power is used & what uses it

While many consider generators as the starting point of power systems, it’s actually the other way around. In our books power systems start with the load. Loads create a demand for electricity, and are the reason we have electricity demand in the first place. Much like the way a human heart exists to supply the human body with oxygen, generators exist to supply power to loads – not the other way around.

Like any other industry, the electricity industry seeks to maximise output with the lowest cost possible. 3-phase AC systems are one way to transfer as much power as possible over long distances for distribution.

The three lines in a 3-phase system can transfer the same power as a single-phase system, all without requiring a return line. The advantages of this are:

– Can be operated without a neutral wire

Not all power is created equally, and it’s important we can learn how to distinguish them from each other. If we look at an industrial motor for example, they have a wide range of uses. But the two main components stay the same. There’s the stator which receives energy from the grid, and the rotor which rotates to create the desired outcomes (e.g. running a turbine). This desired outcome is what we call active power.

But sometimes extra power is needed to transfer active power. A good example of this comes from an electric motor (induction type). Like an industrial motor, they have both a stator and a rotor. However, unlike an industrial motor they are not connected mechanically. Instead, they are connected magnetically. Inside the motor itself you have a number of coils which generate magnetic fields. These magnetic fields are used to connect the stator and rotor together. The energy being transferred between the magnetic and electric fields is called reactive power. This reactive power is generated in order to transfer the active power to make the rotor turn.

Now that sounds a bit complicated, but let’s use beer as a way to simplify things. When we pour beer, the desired outcome is beer in our glass. Let’s think of active power as the pint of beer. But sometimes you also get the frothy beer head on top. Whether you like it or not, it’s not actually helping in any way. But it’s nonetheless a part of the beer pouring experience. We can think of the foamy head as reactive power. It’s a necessary part if you want a good pint of beer.

4. What is high Voltage?

Power plants are usually far away from the loads that they’re supplying. The transmission lines connecting them often have some resistance. This resistance can cause energy losses the further the energy travels. Minimising this is critical to ensure as much power as possible reaches its final destination. To do this we must reduce the amount of current in those lines, which is done by increasing the voltage. Once the current is within proximity of the loads, resistance becomes less of an issue. It needs to travel a shorter distance, so the voltage is lowered.

5. Why can’t we send Electricity all across a country?

The length of transmission lines can sometimes cause limitations in stability when moving power through them. Those stability limitations are:

And while they all come with their own difficulties, voltage stability is one of the most common limitations for power transmission within Europe.

When more current passes through a transmission line, larger magnetic fields are created as a by-product. This then acts as a resistance to the transmission of power through the transmission line. The total power transferred depends on the voltage. If you have a sufficient voltage drop,  transferring the same amount of power would require more current to be transmitted. This extra current would further disrupt the voltage. Eventually the difference between current and voltage would be so large, the power transfer cannot increase anymore. This would lead to a deteriorating stability, causing widespread impacts on the rest of the power system. This is why a limit exists for the amount of power that can be transferred via transmission lines.

An interesting consequence of voltage stability limitations can be seen in the Swedish transmission lines (below). Northern Sweden usually has an excess power supply due to their abundance of hydropower plants. Whereas southern Sweden usually has excess demand. While the country would benefit immensely from transferring power from the North to the South, there is a maximum limit allowed which guarantees sufficient margins for operations. While this guarantees the power system is not disrupted, power has to be provided through other means. These include expensive generation and transmission in southern Sweden resulting in higher prices, and low prices in the northern parts of Sweden. 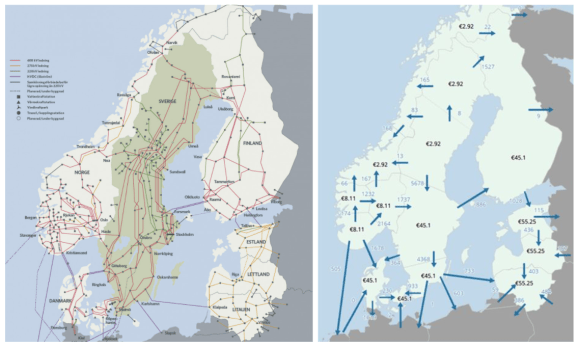