Smart grids are electricity networks that make use of emerging technologies to sense and respond to changes. This means they can continually adjust supply to match demand and keep everything running.

Decarbonising our energy systems to fight climate change means getting more of our electricity from sources such as wind and solar. But unlike coal, oil or gas power stations, renewable sources have weather-dependent output. So the shift away from fossil fuels towards a fully renewable energy system means managing this natural intermittency. Smart grid solutions allow operators to react to changes in real time. This means smart grids have huge potential to make our electricity systems more resilient and accelerate the energy transition. 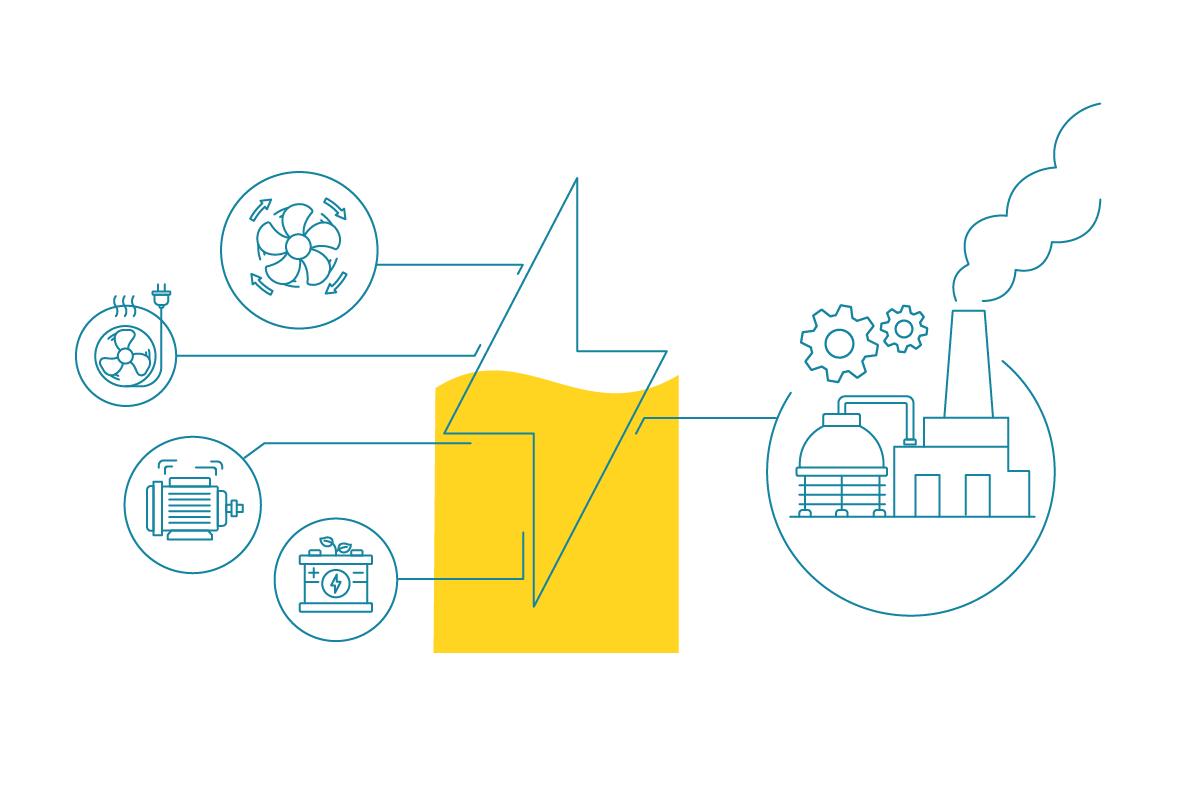 All electricity grids are networks that do the job of delivering electricity from the power generation source to the end user. In the early days of electric power, factories and other buildings had to be close to the generation source of the electricity they used, but the power grid system makes it possible to share electricity on a large (often national) scale and across long distances. (The biggest grid in the world supplies most of the countries in the EU.)

To cover the long distances involved, power grids have a network of transmission lines. Energy moves along them at high voltage to minimise waste. Then a different network, known as the distribution network, carries the electricity on the final part of its journey to the end user. Substations link the two networks, taking the electricity from the transmission lines and passing it on to the distribution network. They do the essential job of adjusting the voltage between the high levels required for transmission and the lower levels needed for distribution.

A smart grid fulfils all the functions of a traditional electricity grid, but also acts as a communication channel between electricity suppliers and users. It does this through an array of sensing and monitoring technology.

When the UK’s National Grid was created in 1935, it was the first integrated national power system in the world. But by 1950, the network was struggling to cope with demand, so work began on building more infrastructure. Throughout the 20th  and early 21st centuries, countries with growing populations and booming industry have wrestled with the problem of “keeping the lights on”: building enough capacity into traditional electricity grids to avoid outages.

With smart grids, the focus is different. Rather than continually increasing the capacity of the power system, those responsible for the nation’s energy supply try to “work smart” with the infrastructure they already have. This means exploring the potential of demand-side flexibility, using technology to manage the intermittency of renewables and using energy storage.

Why do we need smart grids?

Because smart grids convey information as well as electricity, they give us the data we need to manage our energy system. Grid operators have the difficult job of ensuring that overall electricity supply matches demand at all times so that nobody is left without power. They are in constant communication with the highly dynamic energy markets, asking generators to turn their power up or down to match demand.

Forecasting is one important tool for balancing supply with demand. Analysts are continually predicting how much electricity will be used at any given time, and passing this information on to electricity markets. It’s not a myth that there is a surge in demand when popular television programmes are broadcast – one episode of Coronation Street caused a surge of 800 megawatts after hundreds of thousands of viewers put the kettle on at once! This pattern is known as “TV pickup” and grid operators plan for it.

But forecasting can’t predict the smaller hourly or half-hourly changes in people’s electricity use. To make the continual supply adjustments required, grid operators need access to real-time (or close to real-time) information about how much electricity people are using. Smart grids make this possible because smart meters monitor customer usage and share the data with the grid (as well as with the user themselves). This data is used to adjust supply.

Traditional electricity management means trying to predict demand and ensure that the supply is in place to cover it. But smart grids let operators do more than anticipate demand: they make it possible to actually manage demand.

Suppliers know at what times of day demand tends to peak, so they can offer customers time-of-use tariffs with a cheaper rate at times of lower overall demand. Smart meters allow users to see how the cost of their energy use is changing throughout the day. This kind of instant feedback allows businesses to develop energy management systems to maximise their use of cheap off-peak electricity and identify possible efficiency savings.

Read more about the benefits of demand response

Smart meters empower energy consumers to make informed choices about their power use, not just cutting costs but also reducing their carbon emissions. Businesses with on-site renewable generation or a renewable corporate power purchase agreement can use half-hourly data to align their demand with periods of high output, cutting their emissions per kWh.

This behavioural adjustment also reduces the need for energy curtailment – that is, reducing output below what it could have been purely because demand is too low to use it. When it comes to renewables, energy curtailment is a wasted opportunity to make the most of the emissions-free power available.

Demand response as a resource

Demand response is also an energy resource. Energy retailers are increasingly using virtual power plants (VPPs) to coordinate multiple decentralised energy assets. This cloud-based solution aggregates the power in the system and balances it to provide a reliable supply. Demand response capacity is an asset in this system just as much as generation and energy storage infrastructure.

Distributed energy resources management systems (DERMS) also connect energy assets, but here the focus is on supporting the grid through ensuring that no part of the system is overloaded. Both VPPs and DERMs rely on various smart grid technologies to operate.

The technology behind smart grids

Smart grid technology is continually evolving, but it all revolves around data: monitoring, measuring, sharing and acting on information.

Towards the power systems of the future

Over 130 countries have either set, or are considering, a target of net zero emissions by 2050. To achieve this, we need to act quickly on decarbonising our energy supply, but a fully renewable energy system may seem unrealistic because of the intermittent nature of renewables. How do you keep the lights on when the sun isn’t shining and the wind isn’t blowing? Smart grid technology can help with this by allowing suppliers and customers to optimise the link between demand and renewable generation. It can also unlock the potential of energy storage by ensuring that power is stored when it is abundant, cheap and green, then released at times of peak demand.

We are a long way from that fully renewable energy system at the moment, but smart grid technology can help to get us there by providing more granular signals to energy markets. This makes a stronger business case for investment in renewables.

There isn’t a binary switchover between traditional electricity grids and smart grids; it’s more about gradual development. Over 50 countries around the world are investing in smart grids, each working within a different energy policy landscape and with a different definition of success. But they all share a recognition of what this technology can achieve: greater energy efficiency, lower carbon emissions and a more reliable electricity supply.